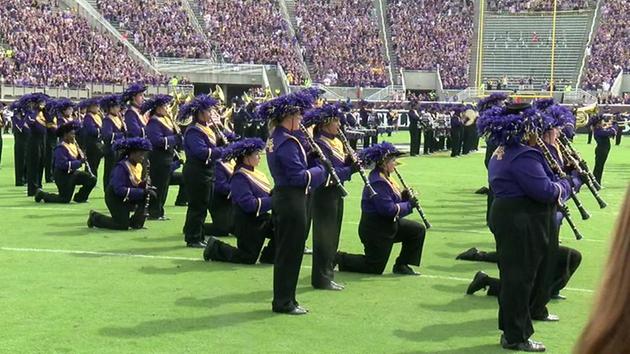 GREENVILLE, NC—This past Saturday, October 1, was the ECU Pirates’ football game versus Central Florida. While the Pirates lost to the Knights, 47-29, the ECU band did not make things any better when members of the marching band protested the National Anthem and America, sparking both outrage and support.

“East Carolina University just had a ‘Come to Jesus’ moment with a group of perpetually-offended, self-entitled marching band members who disgraced America during last Saturday’s football game,” according to Fox News.

It was said that around 19 members of the band did one of two things: either took a knee, or did not play an instrument during the National Anthem.

“While we acknowledge and understand the disappointment felt by many Pirate fans in response to the events at the beginning of today’s football game, we urge all Pirate students, supporters and participants to act with respect for each other’s views,” said ECU Chancellor, Cecil Staton.

According to Chancellor Staton, he thought that it was a way for the ECU band to express their personal beliefs. While he asked for respect from all students, supporters, and participants, many ECU football supporters did not. Throughout the game, the fans were booing and saying bad things against the band.

“It was unfortunate and poor judgement for these few band members to disrespect our country, to take advantage of the uniforms they were wearing as ECU Pirate band members – to advance a personal agenda. It was not the right time, place, and (it was) the incorrect manner for these students to articulate personal dissent. It reflected poorly on the band,” replied Raleigh attorney and member of the ECU board of trustees, Kiernan Shanahan.

While many people are not for protesting against America, the ECU band saw it as an opportunity to show how they felt about America in light of recent events involving altercations between citizens and police. Even though the band thought they were doing the right thing, it lead to many consequences for them and the university.

“We are working with the university and the school of music in response to the incident with the band prior to the game on Saturday. While the marching band does not report to athletics, we do count on them to be an important part of the game day experience,” said East Carolina Athletic Director, Jeff Compher,

Hopefully, ECU will be able to settle all of the issues that occurred because of the band’s protest.

Information from Fox News, Todd Starnes, and ABC11 was used in this news report.