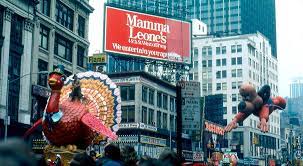 As the days go by we get closer and closer to Thanksgiving, and one thing I like is watching the Macy’s Thanksgiving Day Parade, and you can as well.

There are many things to love about  Thanksgiving, whether it is giving thanks, talking to family or eating food. But the Macy’s Thanksgiving Parade makes it much better. Every year on Thanksgiving, Macy’s hosts a parade where we get to watch giant balloons, floats, marching bands, Broadway performers and more. This year they are marching through the streets of Manhattan.

Just because it is all the way in Manhattan that does not mean you have to miss it. This is one of the biggest parades that happens in the United States. According to marching.com, “The Macy’s Thanksgiving Parade attracts more than 3.5 million people per year and an additional 50 million watch it on TV.” To put that into perspective, that is greater than the population of Spain. Yeah with a quick Google search, you can see that Spain’s population is only 47.33 million, at least as of now. So if you can’t go in person, join the millions online.

With a new year that means new balloons. According to wflx.com, ”Some new balloons you should expect are Bluey, Diary of a Wimpy Kid, Dino and Baby Dino, Stuart the Minion and a Balloonicle of striker, a U.S soccer star.” It is awesome to see what is new, but you can’t forget the classics. Some iconic floats that may be shown are Snoopy, Pillsbury Doughboy, Tom the Turkey and Santa’s Sleigh. So are you ready for the parade?

The annual Macy’s Thanksgiving Day parade will air from 9:00 am to noon on Thursday across most major television networks.