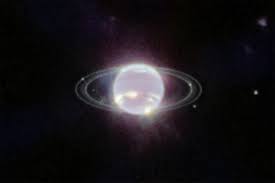 On September 21, a picture of Neptune’s rings was captured for the first time in 30 years.

This picture was taken on the James Webb Space Telescope (JWST). When the Voyager 2 spacecraft was up in space it was able to capture the rings, however, the picture is a little blurry and can be hard to read.

The JWST was able to capture the picture from 4.4 billion kilometers away. The telescope has also revealed the ice giant, fainter dust bands, and 7 of the 14 known moons Neptune has.

In the picture, Neptune does not appear blue. The reason for this is because of the range in which the picture was captured. The range was not as good 30 years ago, so Neptune appears blue in the older picture.

The JWST is the world’s biggest and most powerful telescope that was only launched last December. The James Webb Telescope is already revealing so much to the human eye. Viewers are excited to see what it can bring in the future to the space world.