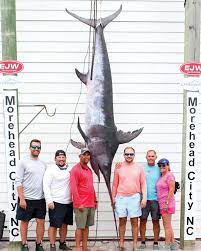 A normal fishing trip for Cary and Brandon Carney turned to a fight with a 504 pound swordfish.

Sitting off the coast of Morehead city,NC, Cary and his son Brandon  Carney caught a monster of a catch. According to WRAL, Cary Carney “had to hand crank an electric fishing rod that had blown a fuse.” After a 2.5 hour fight, the fish was finally brought to the surface. The fish was so big that when the Carneys took it to Portside Marina, it had to be lifted out of their truck with a fork lift.

The size of this fish was more impressive than anything. This monster of a fish came in at a whopping 504 pounds with a 47 inch bill, and it was 104 inches long from its jaw to tail. This catch destroyed the old record that was 441 pounds, but There are some concerns because according to sportsfishingmag.com, “Authorities are reviewing it to ascertain that the catch was made by sporting means and not using an electric reel which would disqualify it.” The fish can be disqualified from the record if it does not meet these qualifications.

Brandon Cary says, “We’ve filed all the paperwork with the state and have offered to do testing to show how valid the catch is.” If the catch is valid it will be a record-holding fish that may hold that record spot for a long time.