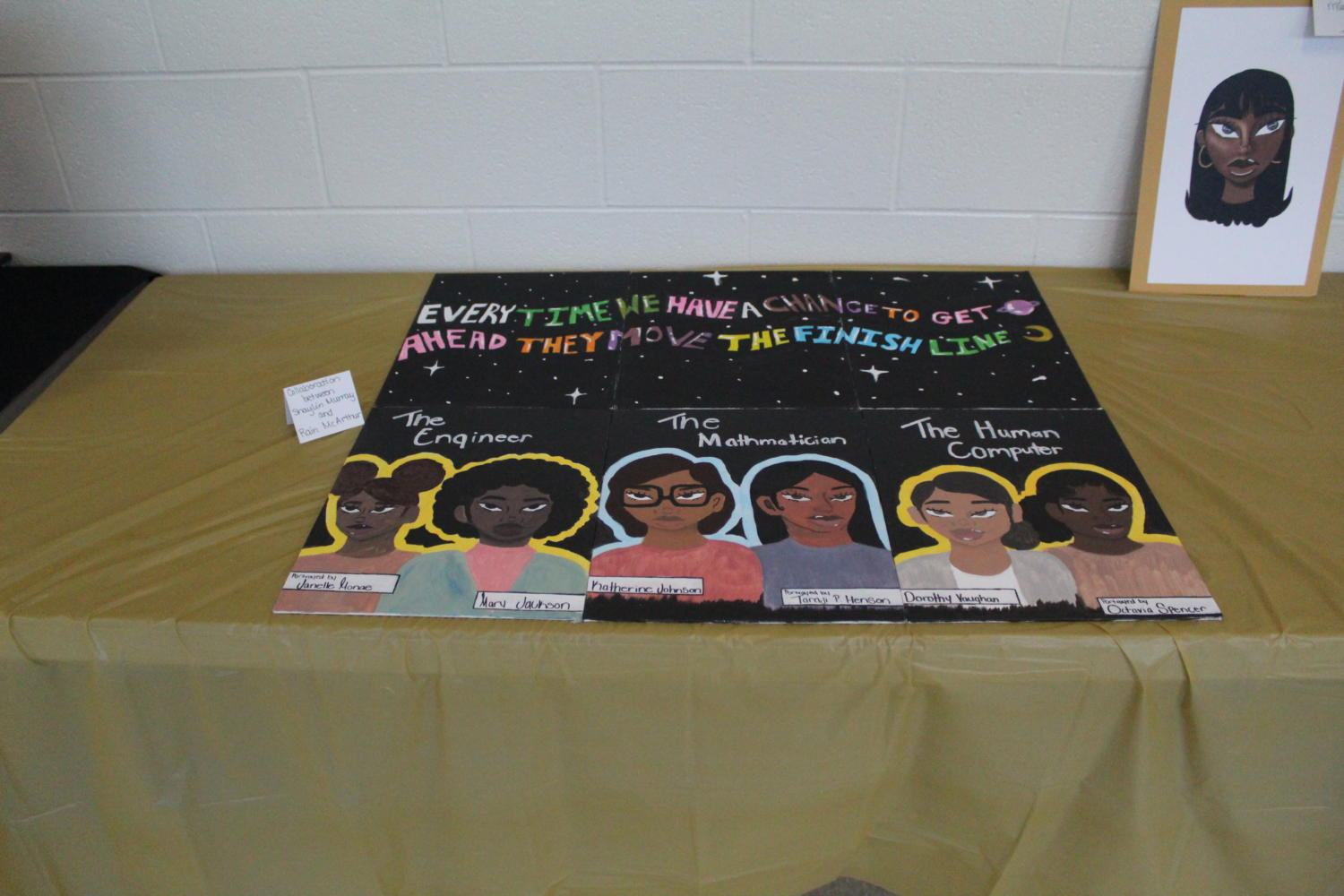 On February 17, 2022 the Racial and Ethnic Diversity Club (RED) held a black history event from 5-8 pm called “A Tribute to Black History Month.” This event was meant to be educational and fun.

There were performances, spoken words and history segments. The CvHS Scribe caught back up with the clubs’ President, Syriah Houlder, and Vice President, Storm Adams, to see their afterthoughts on the event and what everything was like for them. Syriah Houlder says that they came up with the event back in November. “It was so long ago, back in November the idea came up, I believe from Storm, who had just kind of joined the club and had his experience and knowledge from TRI-M. He suggested we should do a mix between the clubs. The club members all wanted to start working on a project and previously had some virtual events so we thought maybe we could try planning something in-person, this time when Storm suggested his idea we jumped on it. We started thinking about it and making rough plans up until Christmas break. When we came back from break it was our main focus until we did it,” Houlder said. Houlder and Adams had different opinions on their favorite part of the planning process. Adams’ favorite was “getting all of the outside guests and recruiting them.” Houlder said her favorite part of planning was “the rehearsals for sure, I had so much fun and I got a lot closer to everyone in the club during that time. Rehearsals also made all of the madness seem like it was coming together and we could finally get a feel for what we had been planning for for so long so everyone really enjoyed them.” This event was meant to expose black culture to all people and Adams expressed to us that he thinks RED club pulled it off quite well. CvHS Scribe also asked Adams and Houlder if they think Cleveland will change its perspective of kids of color and having more events for each poc (people of color) group. “As of right now, I feel like we need to continue to work hard so we can continue to push it out,” Adams said. Houlder said that, “ yes, I think people will start to recognize that everyone has something to say and not listening to everyone creates problems. We need to hold people accountable, not silence anyone, and most importantly make sure everyone feels included and respected. I hope hosting more events far on into the future is one of the ways the school decides to do that because I think they are also a great way for the community, the students, faculty and all their families to join and learn and have a good time.”

The RED Club had students be apart of everything from the performances, the chorus, and art work. History segments about black culture and music were done by multiple students. Taylor Marks performed a solo and Kayla Downing read an original poem. The CvHS Step Team also put on a powerful performance. Cleveland students also put together an art gallery to display the amazing work of black students. Here is a short photo gallery of the art that was presented at the event. Keep scrolling down for more of the story. 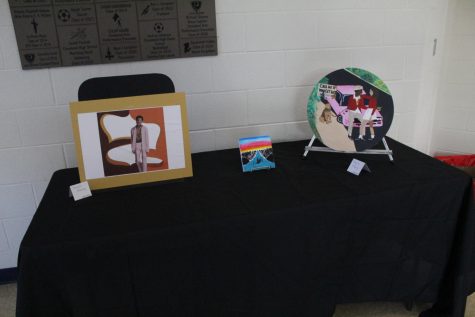 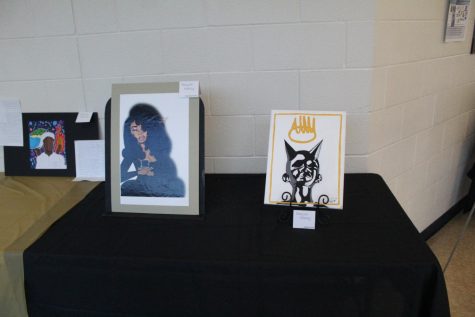 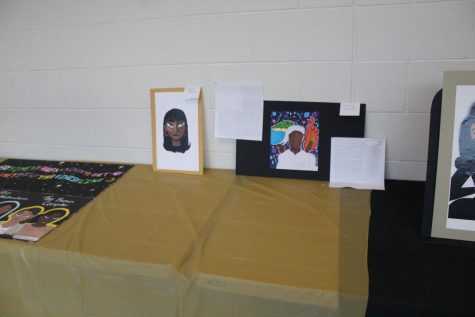 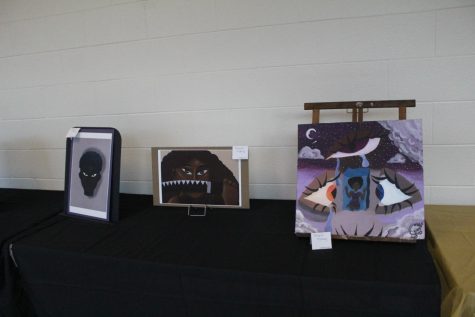 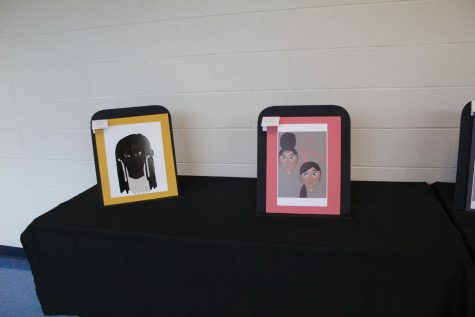 RED club also brought in some outside guests and performers; including J-Bow, 47, and Donovan H. Female artist and musician, J-Bow, is from Atlanta, Georgia and performed alongside her partner, Nia, who is from North Carolina. Their performance included instruments, humming, spoken word, and improv music. The CvHS Scribe also caught up with them after their performance. The Scribe asked them who reached out to them, “Aw man, that’s my guy Stormy [Storm Adams Vice President of RED Club], yeah that’s Stormy all the way,” J-Bow said. J-Bow and Nia both like to wind down before performances that they have. “Usually on a performance day I like to do a lot of cleaning, making sure my head is clear, I don’t like to put myself in bad vibes,” J-Bow said. Nia said “I actually don’t like to practice right before, cause I find that makes you the most stressed, like if I practice it’ll probably be some hours before, for the rest of the day I just like to be in the flow, in the moment, cause it takes that anxiety away because you’re not so mentally projected onto the future, your just focusing [on] experiencing what’s happening around you.” A Tribute to Black History Month was not the first performance J-Bow or Nia have had. J-Bow said “my first performance was a black privilege poem at ‘Impact,’ a place at Duke. I was in high school, I was like 17, and that was my first time I performed on stage. I’m not even going to cap I was pretty nervous, Duke is predominantly white, I kinda knew Duke had a lot of white people there and I think it was around Black History Month, so I wanted to just get my message across about how I felt about the differences and divide and it wasn’t spoken in a way, it was more of me trying to get through. I knew there [was] going to be a lot of white people there, so I wanted them to hear what I had to say assuming that they just don’t know.” “I was in kindergarten. I’m Kenyan and there was this song I learned that my grandfather really liked so I performed that. I don’t remember exactly what it was for but it was something, I was in kindergarten and I got up on stage in front of the whole school and did my thing, I’ve been doing it forever”, Nia said. To find them on social media search “aroundjbow”.

Another outside performance was by solo artist Donovan H ( Donovan Harrell) who is a R&B singer. When he was asked about this opportunity he also said Storm Adams presented him with performing for this event, “My boy Storm, he invites everybody, such a great guy”, Harrell said. Before Harrell’s performances he likes to do warm-ups, ”Mostly I do vocal lessons and stuff and then try to get some breathing because you just don’t want to mess up on one thing and its like oh gosh everyone just saw that,” Harrell said. This event was not Harrell’s first performance as his first performance was in high school, ”My first performance, if were talking like singing singing, its been at my high school, Garner High School, I was performing talent shows for the most part, I was extremely nervous, because I usually sing at the house, my mom knew I could sing but like in front of random strangers its like oh the jitters, I felt so nervous but afterwards I felt so relieved,” Harrell said. To find Donovan H on social media search “donovanharrell”on Facebook and “carolinadreamer92” on Instagram.

The last performance of the night was by a rap and R&B band by the name of 47. This band actually has 12 members, but RED says that all 12 members would’ve been going over the capacity count so only half of the band members were there. The band members names are O, Bear, Joey Zen, Isa, Luca and Nikias. All the band members say that Storm Adams reached out to them with this opportunity to perform at the event. The founder and rapper of the band, Joey Zen, expressed that their first performance was actually only a couple months ago, ”This is not our first collective performance, our first collective performance was back in November at a event called ‘Healing Through the Arts,’ this event was different because it was like in a more auditorium type feel with the stage and nice rows of chairs with people in them, the other performance [was] more of a like stand and vibe out type of performance, but both events were dope and this event was definitely nice.” The band members expressed their feelings and emotions about the first performance, ”I’m not really nervous like that with performing, but both of them had a positive message, both our ‘Healing Through the Arts’ performance and now this one, it just feels great to perform with other performers, not just musicians but other artists, other creators and people talking about history and important causes, its always great to perform along with them,” O said. Joey Zen said “It was chill, I wasn’t necessarily nervous, just ready to get it done and over with and really just spread that message and do what we love to do.” “I was very excited actually, just playing live, playing for people, playing drums its just so fun,” Isa said. “That first performance, especially the ‘Healing Through the Arts’ it was a great experience, there was a lot of members of the music community especially our age, you don’t really see that, but it was a great event, there was so much creativity and really good energy,” Luca said. Nikias said, “‘Healing Through the Arts’, was pretty dope, the energy in there was great. Wasn’t too negative just ready to get that music out there.” To prepare for their performances 47 likes to practice. Joey Zen said some other things he likes to do during that time are, ”don’t do any vocal warm-ups, I just flow, I meditated earlier in the chorus room [for] like 5 minutes, just that and we do enough practice.” To find 47 on social media search “47eyezonme” and to find their website go to “47eyezonme.com”.

The Scribe also got an audience perspective since we interviewed junior, Selvin Tabora, to tell us his opinion on the event. Tabora found out about the event through school “my advisory teacher mentioned he had tickets to it.” Kayla Dowing’s poem was Tabora’s favorite part of the event. Tabora expressed that if the school had another event similar to this one that he would come back “I think black history should be appreciated and valued in our school.” Tabora did have some critiques to the event as well since he would “takeaway the award ceremony at the end, I understand the tokens of appreciation but they were fine with the certificates.”

This event was filled with knowledge, history, music, artwork, performances, and decorations you won’t soon forget. RED club is ready to put on more events to appreciate not just black culture but all culture.