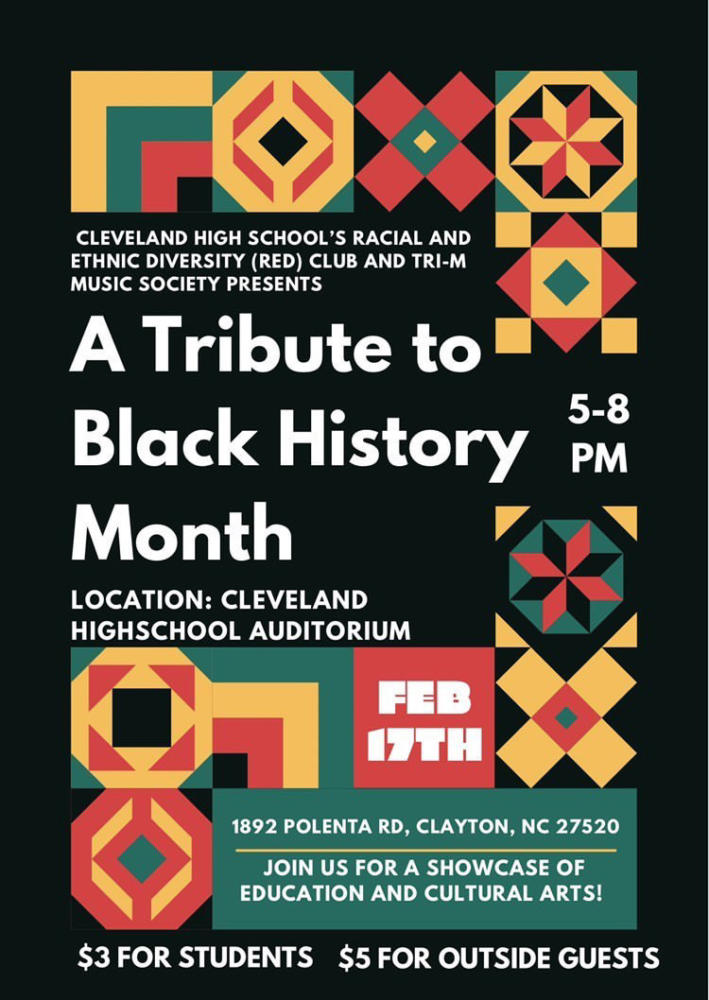 On February 17, 2022 , the Racial and Ethnic Diversity Club( RED) is holding a event called “Tribute to Black History” the event will be from 5-8pm( from 5-5:30 pm will be a pre-event this time will be used to get concessions, drop-off donations, look at artwork and settle down before it starts).The CvHS Scribe went out to ask the president “Syriah Houlder”and vice president “Storm Adams” somethings we can expect, the planning process, and why are they even hosting this in the first place.

The CvHS Scribe asked them how stressful was the planning process, one being easy and ten being hard this is what they had to say. “I’m going to give it an eight, I’ve been really stressed out, I’m excited for it because I feel like it’s going to be awesome, but planning wise there’s a lot to plan for ” president Syriah Houlder said. ”I´m also going to give it an eight, planning anything has its hard work and fair share of stresses, everything could go wrong but everything could go right. What makes it easy is the people in the club who make it easy for us and work hard” vice president Storm Adams said.

Houlder and Adams had voiced why they are doing this event. “I think its always important for to be awareness, no matter where you are and I think in a school, in a community like a high school, it’s really easy to put something together, help people learn”,” For the event, while it’s also fun and a great way to engage with the community, it’s also a great way for people to learn without being a sit down class situation that might not always be as fun”, Houlder said. ”Whenever we came up with this idea of the service project, I came up with the idea with Syriah on behalf of Tri-M( which is the music honors society here at Cleveland) I’m the president of that club as well” , “I grew up with a lot of idols and heros of black musicians one being Prince, and a lot of reggae artist and I wanted to be some sort of advocating for black cultural arts because not many people realize how black and brown musicians have made an impact on not just the United States but the world”, Adams said.

Houlder and Adams were asked if they think people will like what they have in store for this event. “Absolutely,there’s so much, even with our outside local musicians coming in, I’m excited for everybody to see that, I’m excited to see it as well because I’ve never experienced a show like that”, ”We have a mix of different things, so I think there’s going to be something for everybody “, Houlder said. “This is going to be rager, this is going to be awesome”. ”The acts performing here that go to Cleveland, I know they’ll knock it out the park but their are some musicians that I invited, ya’ll aren’t ready for this, I don’t think I’m ready for this”, Adams said

This event is also a fundraiser and a service project, the service project is for the Johnston County homeless shelter, RED would like people to bring toiletry for the shelter, if students bring these items early drop them off in room 203 and room 508. The fundraiser part is to raise money for the club. There will be artwork, history facts, fun facts everywhere, there will also be live music, performances, and spoken words. The event will be held in the CvHS Auditorium and RED wants people to bring a family member, friends, people in your community or anyone you just want to invite, they don’t want anyone to miss this spectacular event. Tickets have been sold since February 1, 2022 in the commons area, tickets are 3 dollars for students and 5 dollars for outside guests, students and guests can pay tickets at the door as well. This event is going to be a fun time to get to know people and learn something you may have not known.