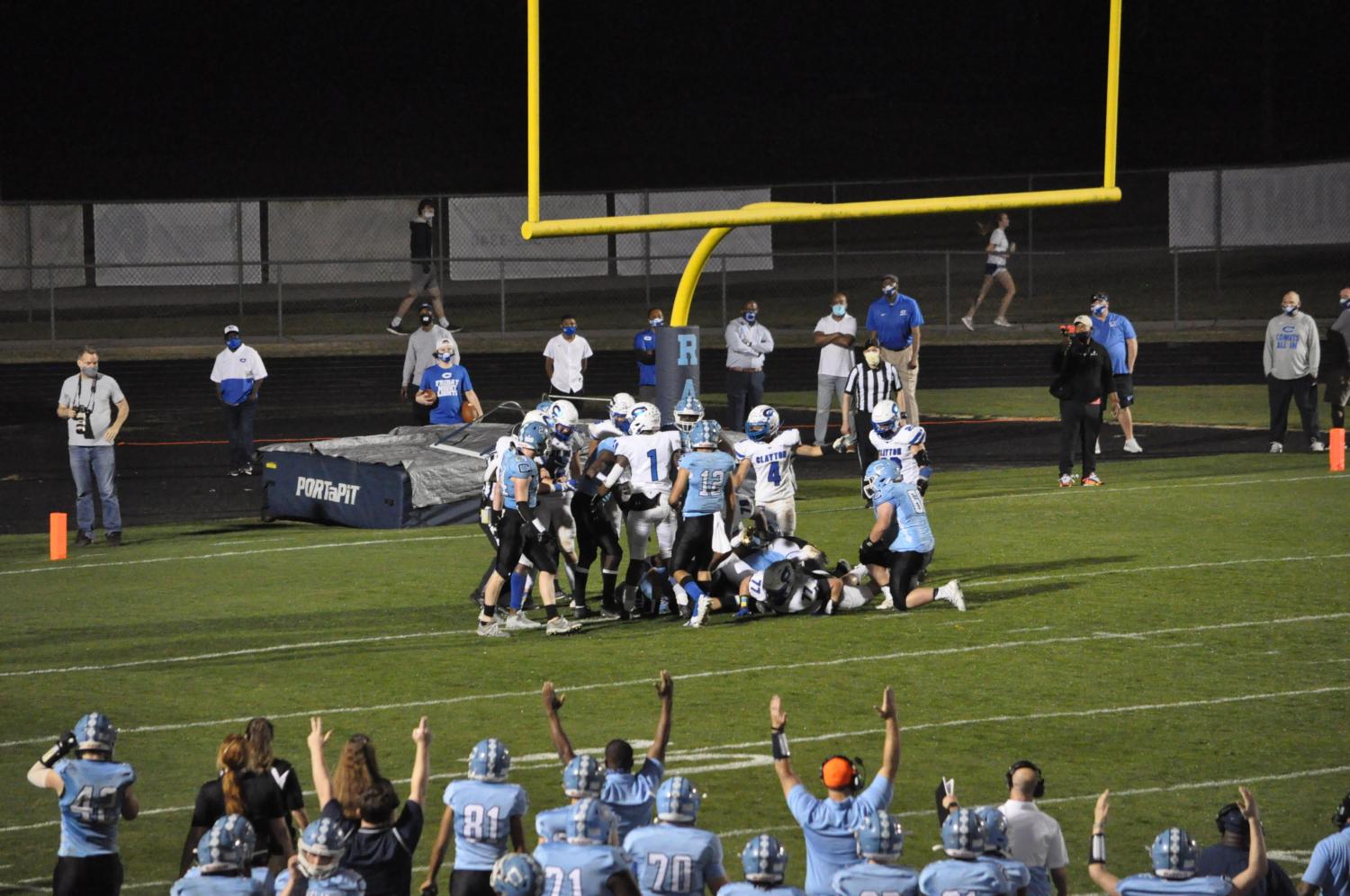 The Rams varsity football team defeated rival Clayton in a close game 34-27. The win allowed the Rams to further their perfect record on the season, which is now 5-0.

Clayton won the coin toss and chose to kickoff to Cleveland. The weather was decent and the field was dry. This was the homecoming game and tickets were sold out, an estimated 1,000+ fans were at the game.

Clayton started the quarter off punting to Cleveland. Cleveland got the ball to their own 24-yard line. The Rams couldn’t get any offense going this possession, so they punted to Clayton. Clayton received the punt and worked their way down the field. Clayton got within field goal range, and they made the field goal, making the score 14-3, Cleveland. The Comets tried an onside kick but failed, as KD Harrison of the Rams recovered it. Cleveland got their offense going when Skyler Locklear completed another touchdown pass to Nick Roccia. Shuaib Zayyad made the PAT, to push the Rams’ lead to 21-3. The Comets couldn’t score before halftime.

The Comets started strong in the second half with a rushing touchdown and a PAT making the score 21-10, Cleveland. On the next possession, the Rams turn over the ball, and the Comets score on a passing touchdown to close the gap to 21-17, Rams. The Rams’ next drive ends with a pick six. The Comets took a 24-21 lead into the fourth quarter, as the Rams’ offense stalled out. The Comets kicked off to Cleveland and they got to Clayton’s 29-yard line before turning the ball over on downs to wrap up the third quarter.

The Rams started the fourth quarter by forcing a Comet’s punt. Cleveland’s offensive struggles continue, and they turn the ball over on downs again. Clayton got within field goal range and made the field goal, making the score 27-21, Clayton. The Rams finally got something going on offense, as Amir Johnson rushed for a touchdown. Cleveland missed the PAT, deadlocking the game at 27 all. After a failed onside kick attempt, the Rams defense forced a Comet’s punt. The Rams got some offense going again, as Skyler Locklear rushed for a touchdown. Shuaib Zayyad made the PAT, pushing the Rams back ahead, 34-27. Clayton had one final opportunity to score, but the Rams defense stood firm. The final score was 34-27, Cleveland.

After the game, Cameron Goins said, “You could really feel the presence of our school spirit.”

Ryan Klimp said, “We were doing really good on both sides of the ball, and then when our star player got hurt, we lost momentum, but we didn’t give up and finished with the win.”

Dillon Pardue said, “We did really well in the first half, but once Omarion went down, you could feel Clayton gaining momentum when they had that pick six, but Skyler clutched it up with those runs.”

Nick Roccia said, “The game was filled with emotions from the beginning to the end. Nothing like a rivalry with a sold out crowd, and a breathtaking game that went down to the last drive of the game to win. Though physically we beat them the whole game, mentally we had them till the third quarter when all were uneasy about the severity of Omarion’s injury. This was the first week we faced adversity being down to another team. Cleveland is different, though. We got some insane athletes all across the board. Amir reminded us of how much of a dawg he is and stepped up at running back. Defense had a clutch stop at the end that led to us on offense scoring to win the game.”

QB Skyler Locklear finished the game 12 of 24 for 214 yards passing with 2 touchdowns and 2 interceptions. He added 6 carries for 42 yards and one score. Before injury, Omarion Hampton had 58 yards and a touchdown on 7 carries and one reception for 4 yards. The severity of his injury is not known. Amir Johnson had 53 yards and a touchdown on 15 carries, and he added 1 reception for 14 yards. Nick Roccia led the receivers with 5 catches for 108 yards and 2 touchdowns. On the defensive side, KD Harrison and Dillon Pardue led the way with 11 and 12 tackles each. Pardue posted 3 sacks.

The Rams’ next game will be Thursday, April 1, against conference co-leader West Johnston (5-0, 3-0 in Greater Neuse 3A conference).